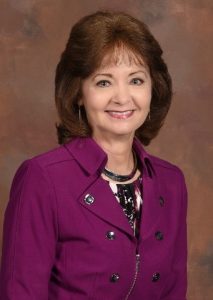 Gretchen B. Caughman, PhD is the Executive Vice President for Academic Affairs and Provost at Augusta University. As the university’s Chief Academic Officer, Dr. Caughman is responsible for advancing all aspects of the academic mission of the University, ensuring excellence and innovation in the delivery of existing knowledge and the discovery of new knowledge. In addition, she is a Professor in the Dental College of Georgia, the Medical College of Georgia, and The Graduate School at Augusta University. Dr. Caughman earned her Bachelor of Science degree in biochemistry with highest honors from Clemson University, Clemson, S.C. and her Doctor of Philosophy degree in basic and clinical immunology and microbiology as a National Science Foundation Individual Predoctoral Fellow from the Medical University of South Carolina, Charleston, S.C. She completed a 3-year National Cancer Institute Individual Postdoctoral Fellowship in herpesvirology at the University of Mississippi, Jackson, MS under the mentorship of Dr. Dennis O’Callaghan.
Dr. Caughman came to the Medical College of Georgia in 1985 as an assistant professor in the Department of Oral Biology, School of Dentistry, and subsequently rose through the ranks to professor in the School of Dentistry, as well as in joint appointments in the School of Graduate Studies and the School of Medicine. Her NIH-funded research focused on the molecular mechanisms of herpesviral persistent infections, and her teaching areas to dental, medical and graduate students included immunology and virology. She is a member of a number of scientific and honorary societies, including the American Society for Virology, Phi Kappa Phi Honor Society and Omicron Kappa Upsilon Dental Honor Society.

In 1999, Dr. Caughman was appointed Associate Dean of the MCG School of Graduate Studies, and in 2005 became Dean. She was appointed Interim Provost of the Medical College of Georgia in September 2010, and became Executive Vice President for Academic Affairs and Provost of Georgia Health Sciences University in June 2011. In January 2013, upon the consolidation of Augusta State University and Georgia Health Sciences University, she became Executive Vice President for Academic Affairs and Provost of Georgia Regents University (now Augusta University). Major institutional initiatives during her tenure as Provost include establishment of the enterprise-wide Office of Diversity and Inclusion, creation of the Division of Institutional Effectiveness, the launch of the Institute of Public and Preventive Health, the launch of the enterprise-wide Leadership Academy, and the successful accreditation and subsequent reaffirmation of the newly consolidated Augusta University by the Southern Association of Colleges and Schools. Dr. Caughman recently led the successful launch of the Augusta University Cyber Institute, and served as chair of the University System of Georgia System-wide Cybersecurity Initiative Consortium, co-chair of the USG-TCSG Health Informatics Initiative Taskforce, and as a member of the SREB Commission on Computer Science, Information Technology and Related Career Fields. Current initiatives include the creation and launch of the School of Computer and Cyber Sciences and expansion of educational offerings and services through collaboration with the US Department of Defense and under formal affiliations with US Army Cyber Center of Excellence and Fort Gordon US Army Garrison Command.