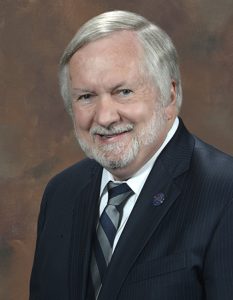 Dr. Keel earned both his graduate and undergraduate degrees from two of Augusta University’s founding universities: a Bachelor of Science in biology and chemistry from Augusta College in 1978 and a doctorate in reproductive endocrinology from the Medical College of Georgia in 1982. After completing postdoctoral work at the University of Texas Health Science Center and the University of South Dakota School of Medicine, Dr. Keel spent 20 years as a professor and researcher before moving into administration.

Immediately prior to his arrival at Augusta University, Dr. Keel served as the 12th President of Georgia Southern University (2010-’15), where he led a student-centric administration and cemented his reputation as an accessible and engaged leader who genuinely enjoys interacting with students and faculty.

During years as a basic science and clinical researcher, Keel served as principal investigator or co-principal investigator on externally funded grants and contracts totaling more than $26 million. He is the author of 65 peer-reviewed scientific publications, 78 peer-reviewed abstracts and 19 book chapters; and he edited four books in the area of reproductive medicine and biology.

Keel is married to First Lady Tammie Schalue, PhD, an accomplished scientist and scholar. Both are certified scuba diving instructors.