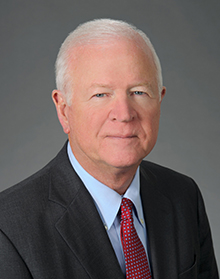 Saxby Chambliss served in the US Senate for two terms and, before that, served four terms in the US House of Representatives. Georgia Trend magazine, which consistently named him one of its Most Influential Georgians, called him “a highly visible and well-respected presence in Washington,” and says he earned “a reputation as an affable but straight-talking lawmaker.”

During his tenure in the Senate, he served as a member of the Senate Armed Services Committee; the Senate Committee on Agriculture, Nutrition and Forestry; the Senate Rules Committee; and his leadership and experience on homeland security and intelligence matters earned him an appointment to the Senate Select Committee on Intelligence, where he served as vice chairman from 2011 to 2014, advocating for dramatically improved information sharing and human-intelligence-gathering capabilities. His previous role as chairman of the House Intelligence Subcommittee on Terrorism and Homeland Security made him one of the leading congressional experts on those issues.

Saxby was first elected to Congress to represent Georgia’s 8th District in 1994. Throughout his legislative career, he has been recognized numerous times by the public and private sectors for his work on agriculture, defense, budget and national security issues.